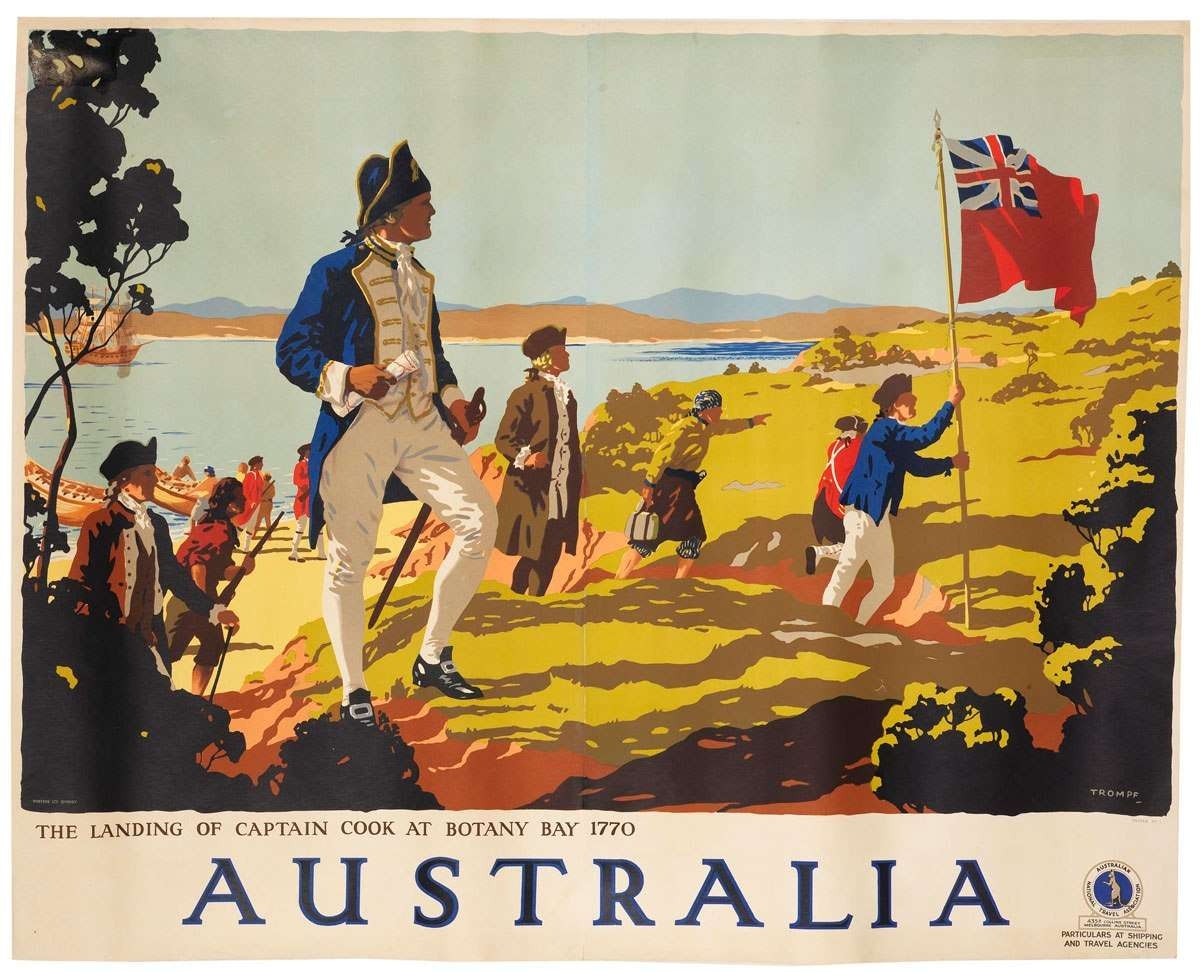 The 250th anniversary in 2020 of Captain James Cook's landing at Botany Bay seemed restrained. The limitations imposed by the prevailing COVID 19 crisis dampened it further. In comparison, the 200th anniversary of the same event in 1970, was the highlight of a joyous year-long jamboree that was nothing short of a ringing national validation.

At the outset Robert Askin, then Premier of New South Wales, boasted that Australia would put on "one of the greatest pageants ever held in the Southern Hemisphere." The glorious day, April 29th, featured a costumed re-enactment in front of Her Majesty the Queen, accompanied by a flourish of national dignitaries and 50,000 super-proud Aussies.

The actual event—the first contact between the existing inhabitants of the continent and the British—was one of complete incomprehension; with ominous portents for the future.

After sailing up the east coast of an unknown land he knew as New Holland, Cook had entered a broad body of water known to its existing inhabitants as Kamay. He named the place Botany Bay. This name suggests that the primary purpose of the landing was the advance of scientific knowledge. Onboard were two leading naturalists of the day, Joseph Banks and Daniel Solander. In the course of their voyage through the South Pacific, they had identified 10% more plant species than were then known to Western science.

Cook dropped anchor in the lee of the Bay's southern headland, now known as Kurnell. From there he and a landing party rowed a longboat toward the shore. Despite the extraordinary sight of strangely-dressed pale people in never-before-seen vessels, several locals, seemingly unperturbed, continued to fish from their canoes. "They were totally unmoved by us," noted Joseph Banks in his journal.

However, the expedition's artist, Sydney Parkinson, recorded that two men on the shore directly challenged the approaching party with spears and cries of "warra warra wai". Historians usually take these words to mean "go away". Today, descendants of the Dharawal people who first encountered Cook, offer a broader meaning. In their language, the words are the roots of "white" and "dead". These meanings suggest a fuller translation; "You're all dead"; and yes, as ghosts, "go away".

In the face of much urging and cajoling, including offers of beads, the challengers held their ground. It was a mutually incomprehensible stand-off. Finally, to secure the party's passage, Cook himself raised a musket and fired off a warning shot. Despite the shattering shock of a previously unheard sound, the challengers continued to block the party's progress. Cook finally and forcefully resolved the impasse by lowering his musket and shooting one of the challengers in the leg.

Cook's landing was not concerned with permanent occupation. However, his forced resolution of a challenge to proceed foretells the responses that future settlers felt they could always resort to in similar situations.

With their path cleared, Cook and his party ventured across the narrow strip of oystered rocks and shell-littered sand to reach land. Today, the landing site on the Kurnell Peninsula, feels strangely isolated from the surrounding metropolis. It's cut-off by mangrove swamps, an incongruous oil refinery, a related shipping terminal, and a recently completed $2 billion desalination plant. On its higher ocean side, the Peninsula is crowned by a thicket of low virgin bush, while yellow and ochre cliff-faces stand as stone sentinels towards an eternally rolling sea.

From the original landing spot, the view across the low exposed Bay offers itself as an allegorical story of modern Australian history. Visible on the far side, hovering above the heat-haze of the distant international airport rises the far-off shimmering city centre of Sydney. 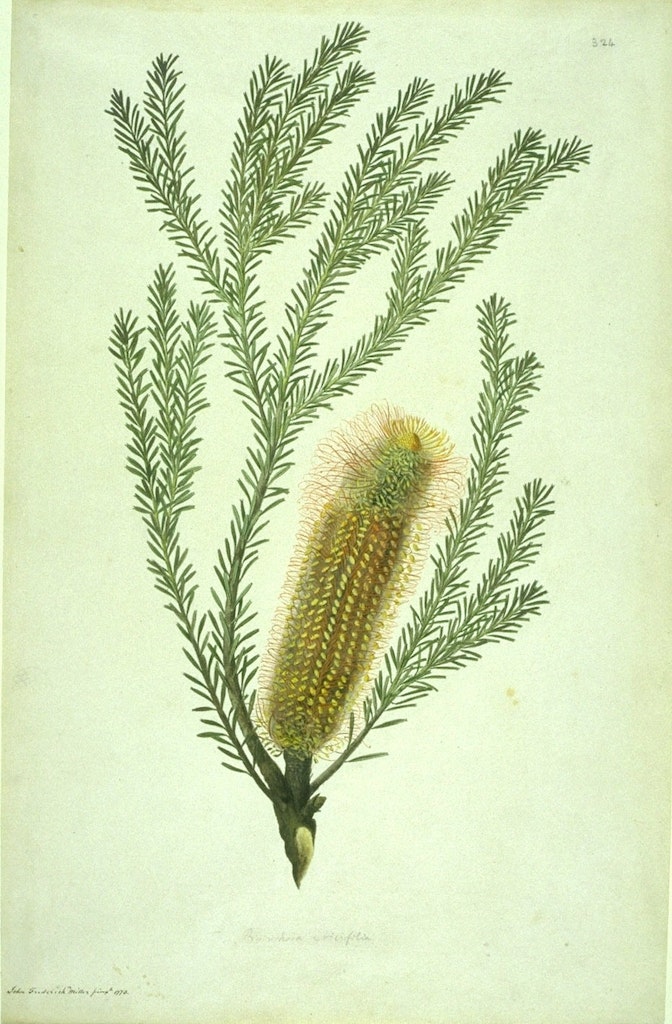 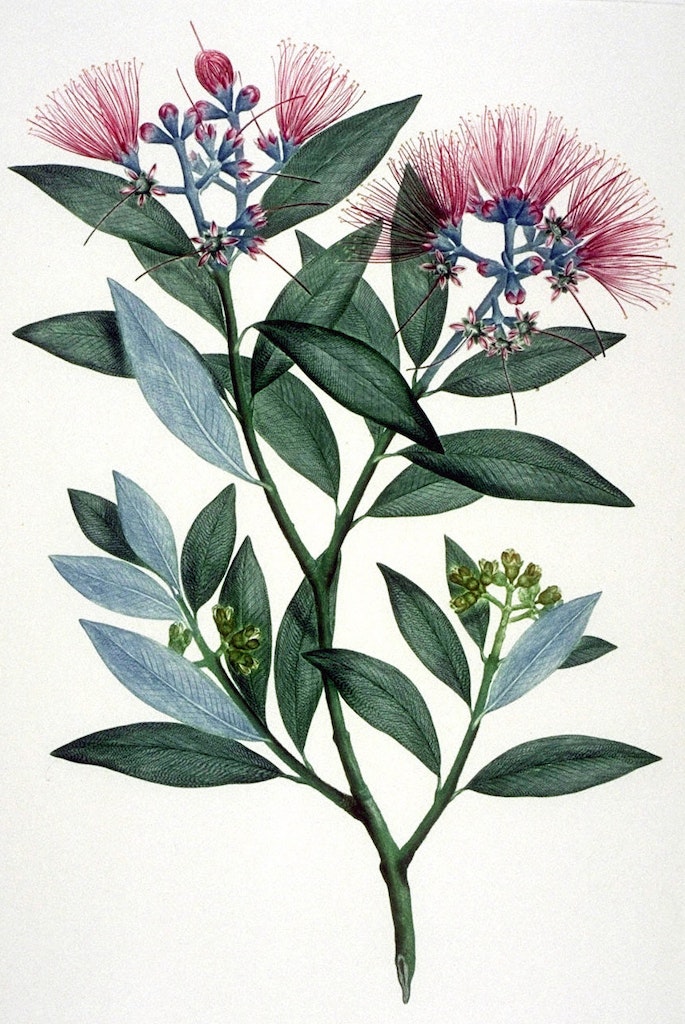 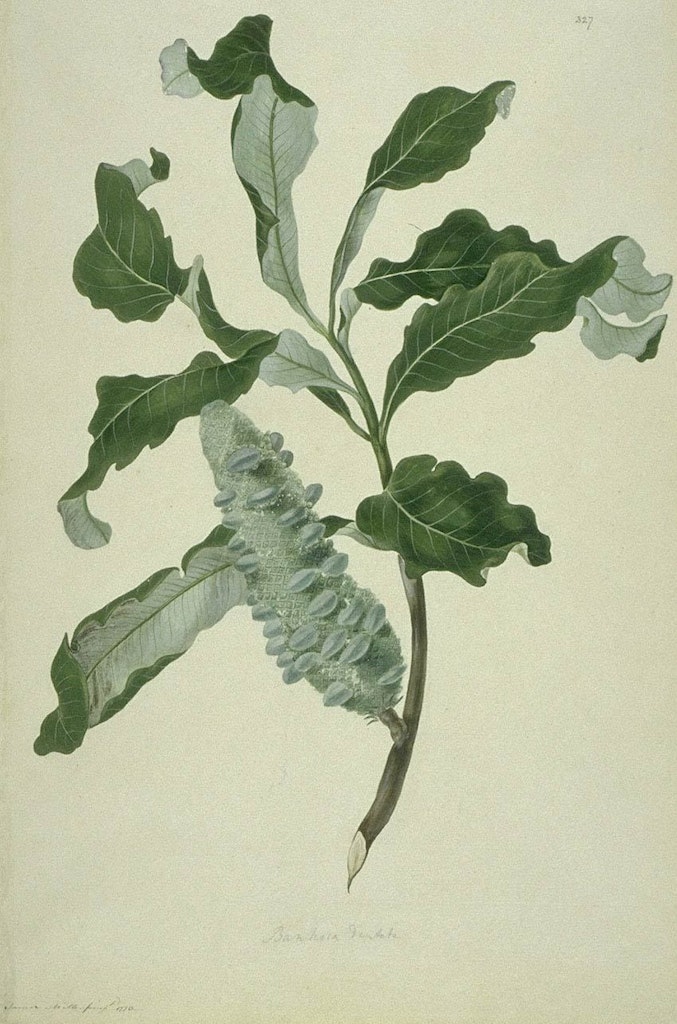 The re-enactment of 1970 suggested that Cook then claimed possession of the new territory for King George III. In truth, that occurred four months later, once Cook had completed his survey of the eastern edge of the continent. He formalised the British claim on an island in Torres Strait he aptly named Possession Island (known to its inhabitants as Bedhan Lag).

How Cook's interpreted of his orders there, assured the calamity that would later befall the continent's existing inhabitants. None of them at the time, could have known what was to unfold. Cook's orders read: "... if you find the Country uninhabited take Possession for his Majesty by setting up Proper Marks and Inscriptions, as first discoverers and possessors".

Unquestionably, Cook and his party encountered all sorts of human activity during their voyage along the continental coast. However, to Europeans of the time (and applied as international law), visible indicators of occupation required observable evidence of herding and farming. Such signs presumed the recognition and tradability of property rights. It was a legalistic determination that set the terms for future interactions with territories, then unknown to Europeans. In claiming possession, Cook had assessed the land as not recognisably "occupied"—or Terra Nullius.

In New Zealand, the British determined that those islands were "occupied", meaning that future contacts there would involve treaties. Significantly, of all Britain's settler societies, Australia was the only one that progressed without treaties. 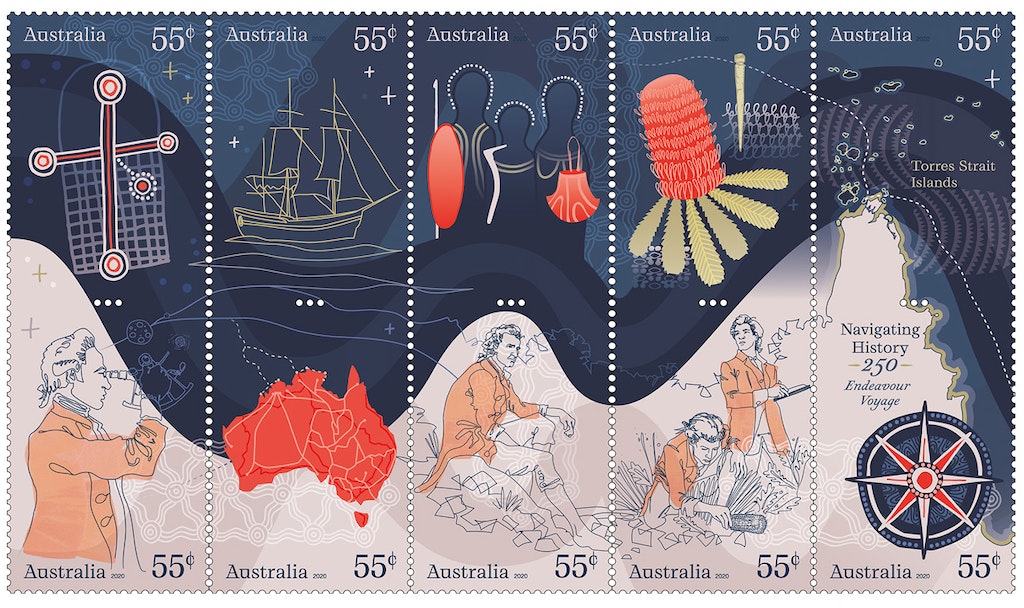 By 1783, thirteen years after the landing at Botany Bay, the British found they could no longer send their ever-growing prison population to their former American colonies. By 1785, based on the descriptions of Cook and Banks, the British government resolved to establish a penal colony at distant Botany Bay.

In early 1788, a British fleet arrived in Botany Bay. However, following a quick survey, they decided to move to a more favourable site, 20 kilometres north. There, they established the settlement of Sydney. Many more settlements followed as the British progressively colonised the continent, and projected their influence into the South Pacific.

In 1788, no matter what the aims of the settlement, its legal framework (Terra Nullius) and the prevailing assumptions ensured the inevitable decimation of the original population and the ruination of their social structures. This unfolding tragedy would re-occur through multiple acts of dispossession to come. And, as first seen at Botany Bay, by force if necessary. But first, the existing inhabitants had to survive disease.This served as the gruesome guarantor of the inevitable. In two years from 1789, 50% of the original inhabitants around Sydney died from smallpox. Disease spread inland beyond the original settlement, arriving in advance of relentlessly expanding encroachments.

Researchers have only recently begun assessing the extent and nature of massacres as the dispossessions progressed. Shocking as it may be for many modern Australians, massacres (i.e. the murder of six or more people) occurred well into the 20th century. Professor Lyndall Ryan of Newcastle University (NSW) estimates there are 500 massacre sites across the continent. So far, she and her team have located 250 specific sites where settlers and various agents of the crown murdered more than 6,200 people.

It is unlikely that those involved at the first mutually-incomprehensible encounter at Botany Bay understood they were the protagonists at an epochal moment in the continent's long history. From that Sunday afternoon in 1770 on, the flow, pace and shape of the story of this long-isolated land could never be the same. 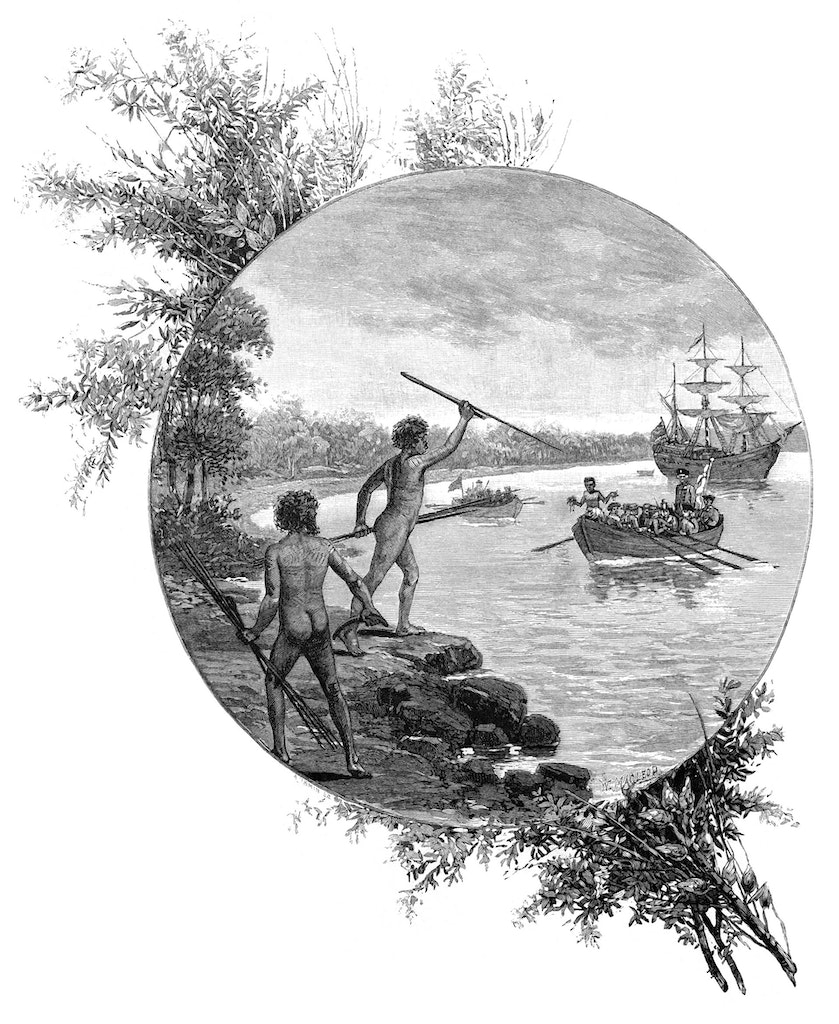