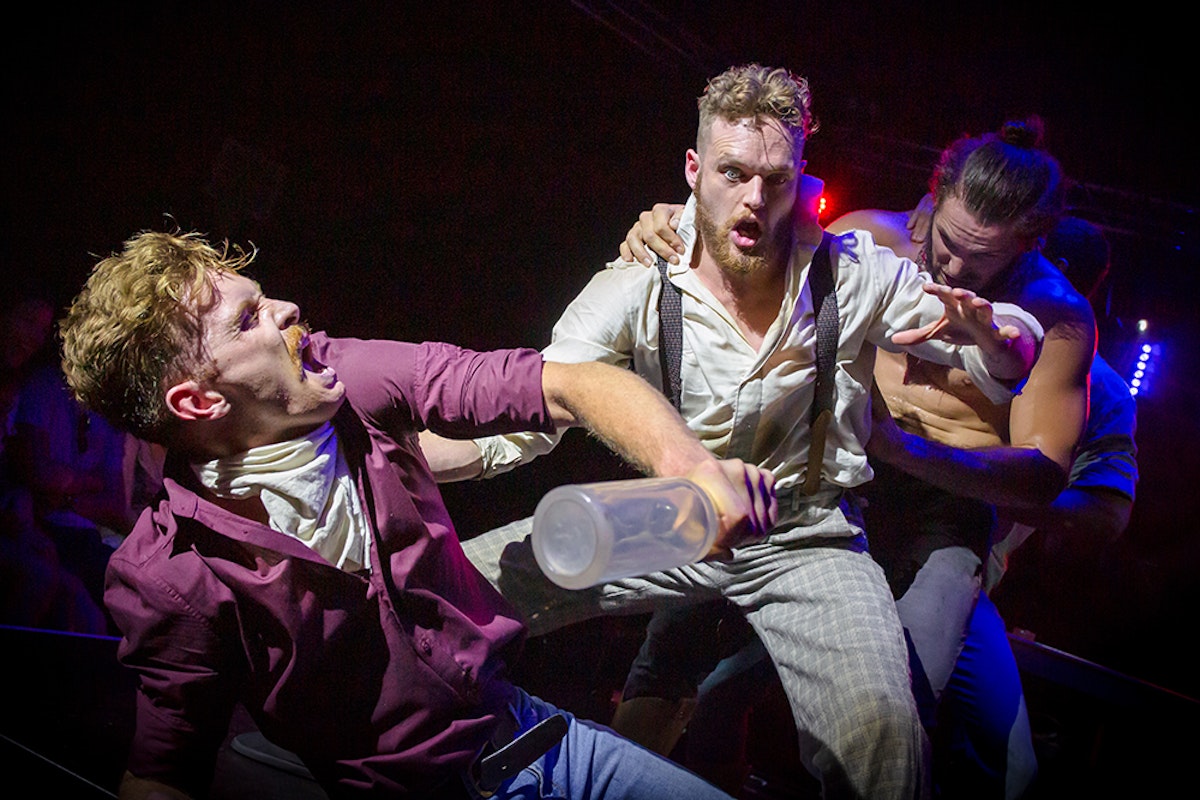 Above: The boys from Railed; The shock of bromance.

Which shows at Adelaide Fringe have been earning accolades on the core fringe circuit over the last year? The essential Fringe circuit consists of Edinburgh, its origin point; and the world's second-largest in Adelaide. These two festivals act as trade shows for the English-speaking performance world. For many Australian and international performers and shows, the two events represent two ends of a highly effective and efficient creative incubator.

Adelaide’s prominent role within this unique birthing process for new talent suggests explains why Australasian performers are so over-represented in Edinburgh. On a per-capita basis, there are roughly 800% more Australians playing in Edinburgh compared to Americans. What emerges from the Adelaide end of this unique process must count as Australia’s most-significant ongoing contribution to the ever-evolving broader culture—bar none.

Below are five shows that have been winning plaudits on this extraordinary circuit over the last year. See them just as they begin to make their broader marks.

Click to read more about the Core Fringe Circuit

Rouge invites you into an adult fantasy that is both palpably-sumptuous and aesthetically-pleasing. It exudes a liberating sense of comfortably shameless sexuality; ever ready to open up to all sorts of lush imaginings. Yet Rouge is always friendly.It’s happily playful; ever ready to goof-off and self-mock. That sexuality was always this safe.

From backstage, Rouge pulls-forward the radical inclusivity that has always been the mark of the travelling circus. In Rouge, it’s out now, and centre stage. Rouge is so gorgeously subversive, in so many ways, it doesn’t need to labour its inherent radicality.

The show was devised for the fading-postcard glamour of the original surviving Spiegeltents. Its starting point is a modern circus-take on a 1920s jazz club. With its contemporary take, Rouge would pleasantly impress the likes of a Marlene Dietrich, one of the performing ghosts of these passing fantasy palaces.

Honey, can you spare a dime

In the late nineteenth century, there was a fully human, penny-for-a-song singer plying her trade on the streets. One tragic day, a famous man, with the latest invention, recorded and stole her voice. She became forever disconnected from her humanity; condemning her forever to the existence of a mere automaton. These were the futuristic, human-like machines that were the promise of the age. Slumped forward, seemingly asleep in her fin-de-siècle finery she propelled through time, into a new and foreboding century. She awoke to observe her surroundings, when brushed by a passing divine-human spark.

When awake, with a limited range of mechanistic actions, she strove to surpass beyond her bounded existence. With haunting, melancholic melodies, she describes what she see—the returning armies from war, the Depression lines. She sings with an air of infinite sadness.—of the misplaced expectations, hoped-for connections and abandoned loves. Honey, Can You Spare a Dime? Eventually,the spark of life runs down like an old battery, leaving her again in slumber till again stirred by the passing of another human spark.

Click to read more about The Marvelous Mechanical Maiden

The Handlebard's all-female troupe of pedalling troubadours, delight in plonking Shakespeare right back into the muddied pit of the cabbage throwers. Shakespeare's The Tempest is a tall-tale, of wizardry and natural disorders. It's a comic Elizabethan face-off between good sorcery and wicked witchery; a significant distinction of the time. Elizabeth I herself had outlawed magick, sorcery, but spells and sprites remained very real in the popular imagination. The troupe revel in the Shakespearean delight in the topsy-turvy, while shaking up that peculiarity of Elizabethan theatre—the single-sex cast.

Cycling between gigs, wherever possible, limits what the troupe can carry for costumes and props. With few resources, they propel themselves into all sorts of creative improvisations, adding further to the show's rollicking pace. Their inventive repurposing of what is at hand suggest one big Blyton-esq adventure of dressings-up and make-believe. The real magick of the show is how The HandleBards manifest a hugely imaginative Shakespearean world out of virtually nothing.

The Latebloomers use classical mime and clowning, toblast open the blocked passageways of our highly-defended adult mindscapes. Audiences are powerless to resist the troupe’s expert surgery. The Latebloomers succeed in reconnecting us to the freedom and joy that abounds from completely surrendering to a pure and child-like air of whimsy.

So, what’s Scotland about? Well, nothing... it’s absurd! Ostensibly, it’s a homage to all things Scottish. But that is only the device to allow for an effective procedure. As they conjure-up all things Scottish, they feed into an ever-evolving mind-gallop that steadily disables the resistant adult mind. Kids get it easily, but adults to be pushed.

Within the rich traditions of English absurdism, it must be challenging to cast a shadow beyond the monumental shade caste by M. Python. The Latebloomers, with their Continentally infused absurdity, maybe steering the genre into some newly lit sunny uplands.

Railed is an all-male, western-themed circus (tell that to the judge). It places four highly physicalised, very frisky, and infinitely hopeless bandits, alone in a (very) Wild West. With time on their hands, they cook up all sorts of boys'-own tom-foolery. But, like landing on a horse backward, they never seem to head off anywhere. Life at the outpost comes off as a derailed spaghetti western, with dollops from a demented Looney Tunes for good measure.

Pushed along by a Morricone-esque mash-up man-beat, Railed is male-bonding for the hipster era. These boys make mere bromance look lame. This is direct stuff. Gone are the seedy double-entendres and glitterised-campy devices of an earlier era. No unwary Brads here. Gone also is the tragic guilt of the wind-swept high-planes on Broken Back Mountain. In Railed, there is no need for subterfuge; there is very little resistance.